In India, unripe fruits such as mangoes, Indian gooseberry, unripe tamarinds, and lemons are traditionally used. Apart from these, various vegetables such as gherkin, bitter gourd, carrots, cauliflower, ginger garlic, onion, jackfruit, and citron are also pickled. In most cases, only one vegetable or unripe fruit is used for pickling. But occasionally, a mix of two or more vegetables or unripe fruits were also made. Generally, pickles made from vegetables and unripe fruits are prepared with the utmost care so that they cannot spoil and be preserved all year long. Non-vegetarian pickles are also popular. These pickles are made from chicken, fish, prawns, and mutton.

In Asian countries such as China, pickles are very popular and have also been prepared for thousands of years. Chinese pickles include vegetables such as cabbage, lettuce, yellow tea melon, cucumber, carrots, and shallots. These and other vegetables are added with sugar and salt and put in vinegar. Apart from vegetables, eggs (particularly duck eggs) are stored by applying salt, earth, hay and other ingredients and sealed to mature for about one month. Some pickling processes include soy sauce for fermentation instead of vinegar and in other varieties, condiments such as ginger, garlic, chilli, or peppercorns are also added for a hot and characteristic flavour.

In a similar manner, even the Japanese have their own version of pickles, which include ingredients such as ginger, gingko nuts, carrots, eggplants, radish, plum, green apricot, and soybean paste along with parboiled vegetables. 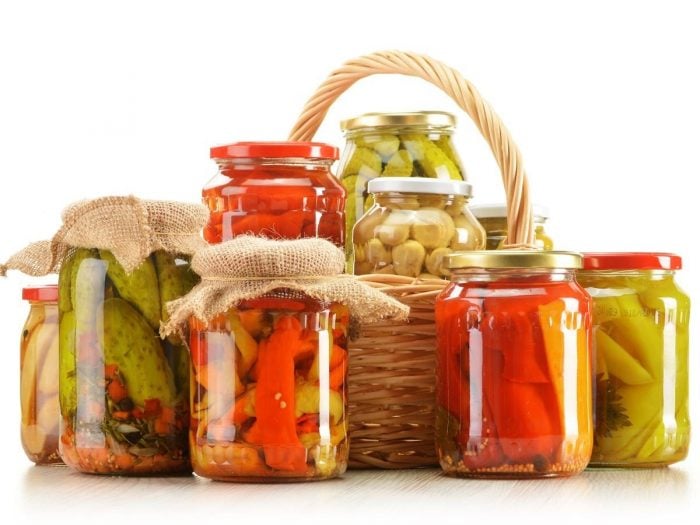 On the other hand, instant or fresh pickles, known as chutneys, are also prepared. These instant chutneys are prepared to last only for a couple of days. There is a wide range of choice in the preparation of instant pickles. Many vegetables, herbs, and condiments are used for preparing chutneys.

Chutneys are very similar to sauces and ketchup that are made in the west.

In the west, pickles are generally made from salted cucumbers, gherkins and various vegetables which are soaked in vinegar. Apart from cucumbers and gherkins, fruits such as peaches, pears, and apples are also pickled. Western pickles generally have flavours of sweet, sour, and salty. On the other hand, Indian pickles are generally pungent in taste.

Each of these pickles is made in different ways. For example, in fermented or crock pickles, either vinegar is added or the vegetables are preserved in salt brine for several weeks. Salt-resistant bacteria present in the vegetables help in converting the sugars into lactic acid or the acetic acid present in the vinegar accelerates the process of fermentation. This is the reason why most cucumber pickles have sour and salty tastes.

Fresh pack or quick pickles, on the other hand, are also very popular, as they are very easy to prepare and are ready to eat. Fresh or quick pickles are not fermented, but heated vinegar and salt solutions are poured onto the vegetables. Fruit pickles and relishes are also prepared in this manner.

Refrigerated and frozen pickles are prepared using the fermentation process. However, instead of storing them at room temperature, they are stored in refrigerators and freezers. In these frozen pickles, the vegetable slices remain crisp. (Ingham, 2002).

Free radical scavenging from antioxidants: Pickles can be good source of antioxidants, especially Decalepis hamiltonii or Swallow root. As the vegetables or unripe fruits are stored fresh without cooking, the antioxidants present in those vegetables or unripe fruits are preserved as it is. Antioxidants are those micronutrients that help in protecting our body against the attacks of free radicals. Free radicals are unstable chemicals that are produced during cellular metabolism. These unstable chemicals react with our cells and damage our DNA to become unstable and in the process, create more and more free radicals. We can protect ourselves from free radical attacks by consuming food with high antioxidants. A lot of emphasis these days is put on antioxidants by dieticians and doctors. 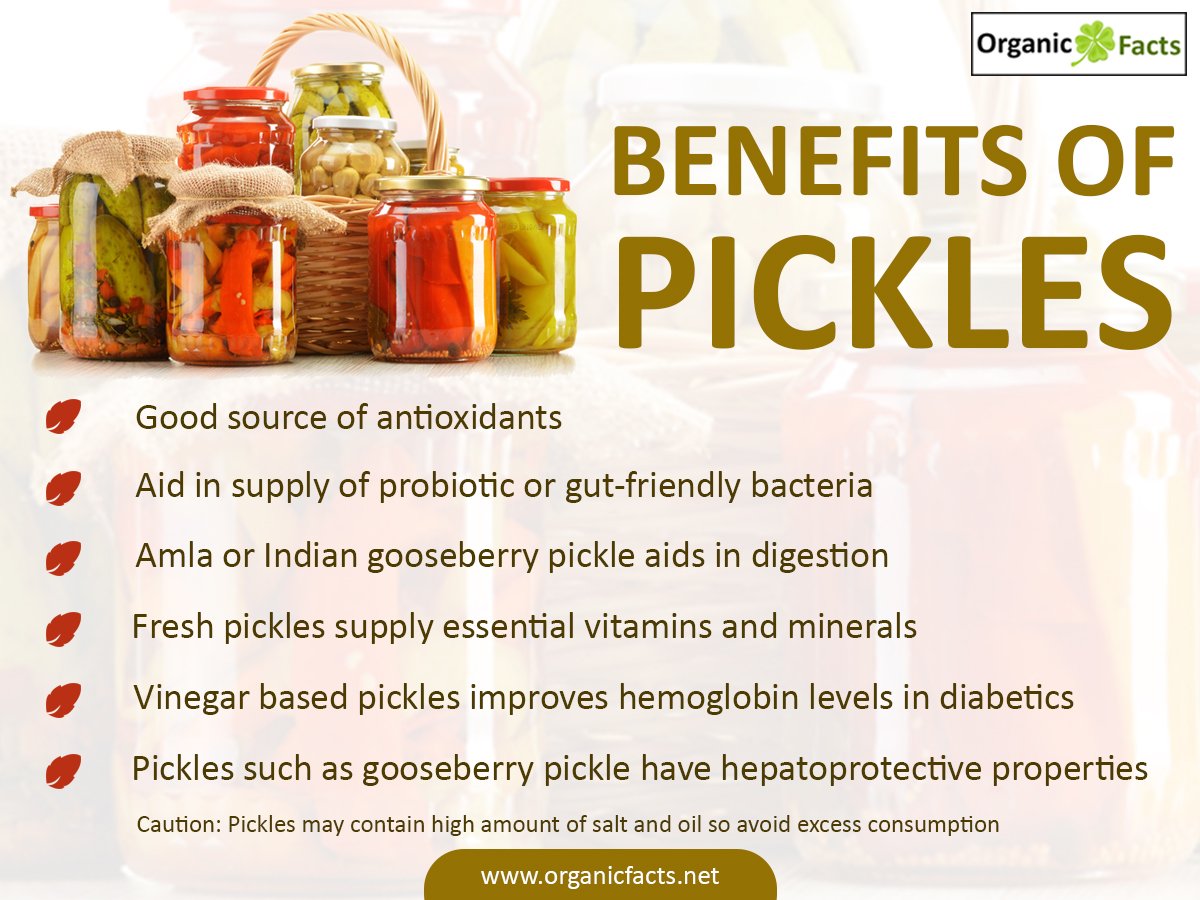 Supply of essential minerals and vitamins: Fresh pickles, dips or chutneys are made from leafy vegetables or herbs such as coriander, curry leaves, spinach, parsley, and amaranth. These fresh pickles are interesting and appetizing ways of making children eat their share of leafy vegetables and herbs, which are otherwise boring for children. Eating freshly made pickles not only tastes good, but they also supply essential vitamins such as vitamin C, A, K, folate and minerals like iron, calcium, and potassium. Vitamins and minerals are vital micronutrients which protect us from diseases, help us build immunity, bone strengthening, vision protection, curing anemia, and various other functions.

Diabetes Control: Studies have shown that consuming vinegar based pickles improves hemoglobin levels in diabetic patients, which in turn helps in controlling diabetes. The acetic acid present in vinegar has been noted to be responsible for this phenomenon. However, care must be taken to avoid the consumption of salted pickles as excess salt increases blood pressure.

Improves Digestion: In India, Indian gooseberry or amla (phyllanthus emblica) is one of the favourite fruits that are pickled. This fruit is believed to possess several health benefits according to Ayurveda treatments and moreover, since amla is a seasonal fruit, unripe amla pickles are prepared. It is customary practice in some Indian families to have amla pickle as the first course or an appetizer as it is believed that amla pickle improves digestion.

Liver Protection: Apart from benefits such as improved digestion, amla or gooseberry pickle also has hepatoprotective properties. Studies have shown that when amla extracts were administered on lab animals with chemical-induced hepatotoxicity or liver damage, the damage was reduced significantly.

Reduces Ulcers: Ulcers are internal wounds caused due to a failure of mucus membranes and acid interaction on tissues. Particularly, gastric ulcers are caused by a weakening of mucous membrane and hyperacidity. Regular consumption of amla or Indian gooseberry pickles also help in reducing ulcers, if any.

Care to be taken while eating pickles

Almost all pickles contain high amount of salt in them. Salt is an indispensible ingredient in most pickles. It not only adds to the taste, but it also helps in preserving the pickle and acts as an anti-microbial, keeping away unwanted bacteria, yeast, and fungi. However, excess salt consumption through pickles can cause problems of its own.

Apart from the risk of hypertension, Indian pickles may contain high quantities of oil, which increases the risk of fat and cholesterol development in our body. Hence, the regular intake of pickles must be reduced and must be limited to only occasional consumption.